Inside the Restoration of the Charles T. Fisher Mansion

A historic Boston Edison mansion that retains its 1920s grandeur

Built in 1922 by architect George D. Mason, the Charles T. Fisher Mansion is the largest home in the Historic Boston Edison District. At just under 18,000 square feet (including the carriage house), the estate includes 14 bedrooms, 14 bathrooms, a pub, a private chapel, gymnasium, and a prohibition liquor vault. The Fisher Mansion has a private section for Michael Fisher and his family, who bought the home over eight years ago and live there to this day. The entertaining section has select private tours and hosts the occasional charitable event like the recent Detroit Gatsby Winter Gala.

Estate Manager Tristan Putnam, who is leading the restoration of the Fisher Mansion with Mr. Fisher, told us that they're working on one project at a time and that, "the house tells you what it wants to get done." 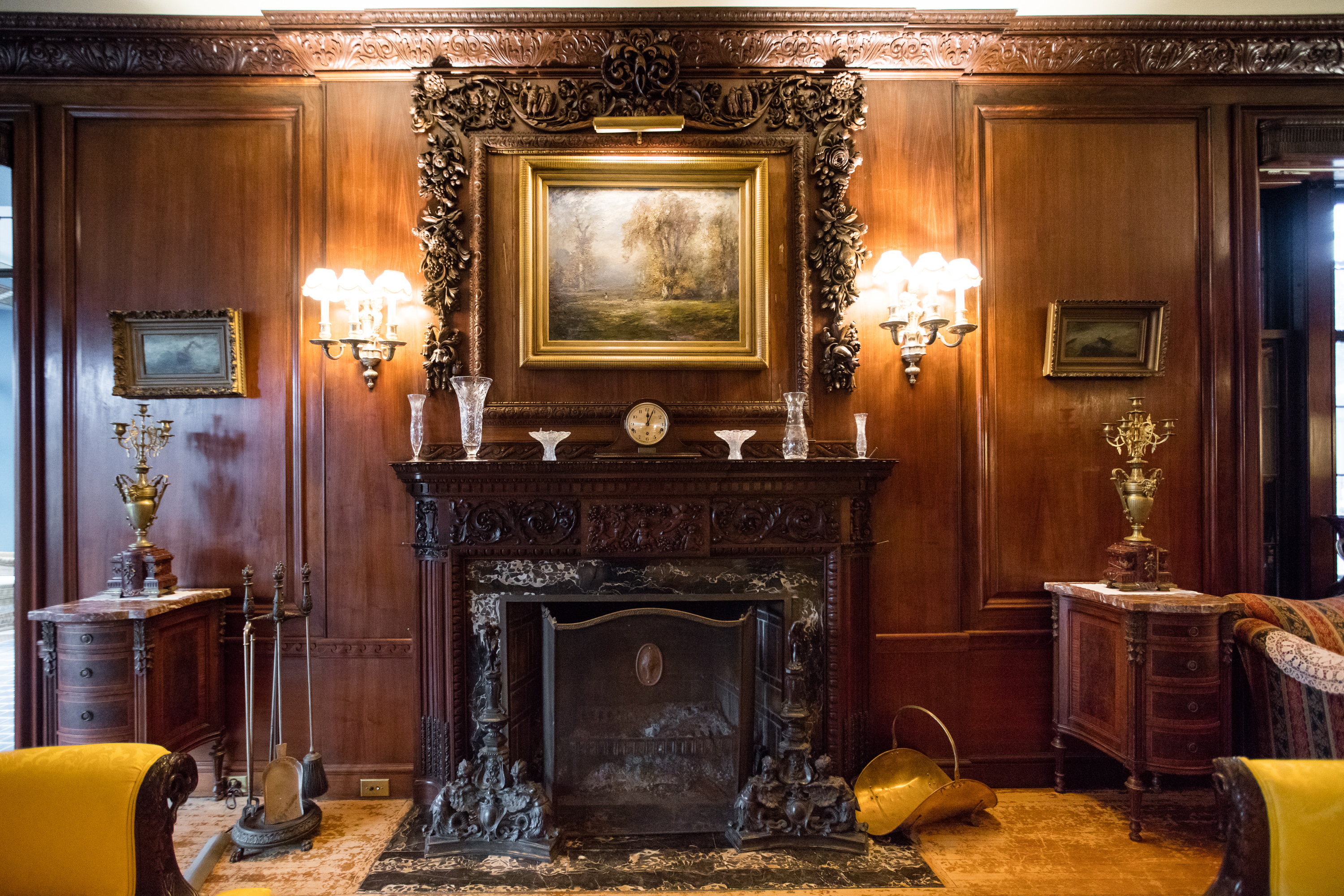 The foyer contains a custom designed Estey Opus 2382 pipe organ. Installed in 1925, these organs were very popular in the 20s and this was on backorder for three years. (The owner still has the original receipt!) It has just under 1000 pipes and its echo chambers go through the four levels of the house. It also has a rare self-playing Mills Violano. The pipes are located behind the grand ballroom downstairs. The organ "speaks" through an ornate grille with original silk.

The recently restored Solarium is filled with custom sized and colored Pewabic tile. The hand-carved Italian marble fountain is the most recent restoration. Originally done in a 1920's style, the room was updated to reflect a Mayan Aztec style presumably after the Fisher Theater was done. The Mayan Aztec border was kept in the restoration, but the rest was brought to its 1920's charm.

The carved limestone fireplace in the library depicts the four seasons. Maker's marks are painted in many of the ceiling panels, believed to represent the craftsmen who built the home.

The breakfast room is the next great restoration undertaking. Conservationist Jennifer Lis recently uncovered some of the original artwork in the lattice work, which was covered by several coats of paint. She has uncovered and restored two of the fifty medallions so far. The rest of the room, including the ceiling, will be redone in time.

The lower level was for the big parties in the grand ballroom. When Mr. Fisher bought the Fisher Mansion, the porch had caved in and damage from that came through down to the lower level. Still quite spectacular with its original marble floor, it will soon be brought back to its original beauty. Also downstairs is a pub and vault. Since the home was built in the 20s, the vault kept Mr. Fisher's private liquor stash safe.

We were also invited into the carriage house, which also recently saw a total restoration. Originally two units (one for the gardener and one for the chauffeur), it's been turned into one 1,800-square-foot unit, currently occupied by Mr. Putnam and Zipper (the ten-year-old pug featured in some of the pictures). Two walls were knocked down to restore the unit, which includes a kitchen, dining room, living room, laundry room, two bedrooms and a bathroom.

Next Up In Detroit Mansions