A thoughtful renovation of a University District Tudor

Renovations—especially in homes where the owners intend to live—rarely finish on time or budget...or at all. This extensive restoration of a 1927 home may have cost more and taken longer than expected, but the result has rebuilt a classic Detroit Tudor into a modern home for future generations.

Just in time for the University District Home Tour, a renovation we’ve followed for over a year is ready for its close up. Homeowners Miranda Steinhauser and Brandon Suman got the keys to the house on Election Day 2016, moved in the week of Christmas 2017 with nothing painted and construction set up in the library, and have now finished most of the details.

The couple started their home search in early 2016, and realized they didn’t want to buy a flipped house, they didn’t want a land bank home, and they wanted to find a strong, stable neighborhood. An old college professor led them to his childhood home, which his mother had lived in up until a few years earlier. The house had all the charm they were looking for, and the outside was once landscaped beautifully, but there was a lot of work and cleaning out to take care of, including a two-story attic full of 30 years of junk.

After thinking about it for a month, chatting with the owner, and searching for financing, they got the keys in November 2016.

Early work included filling four dumpsters of junk from the house, reconfiguring archways and doors, and hiring contractors Cal and Christian Garfield to take on the project. The couple also started to extensively document each part of the progress.

Some of the most striking comparisons of the home during and after construction come in the library, the dining room and kitchen, and the landing. We still see many of the home’s details, now refreshed. 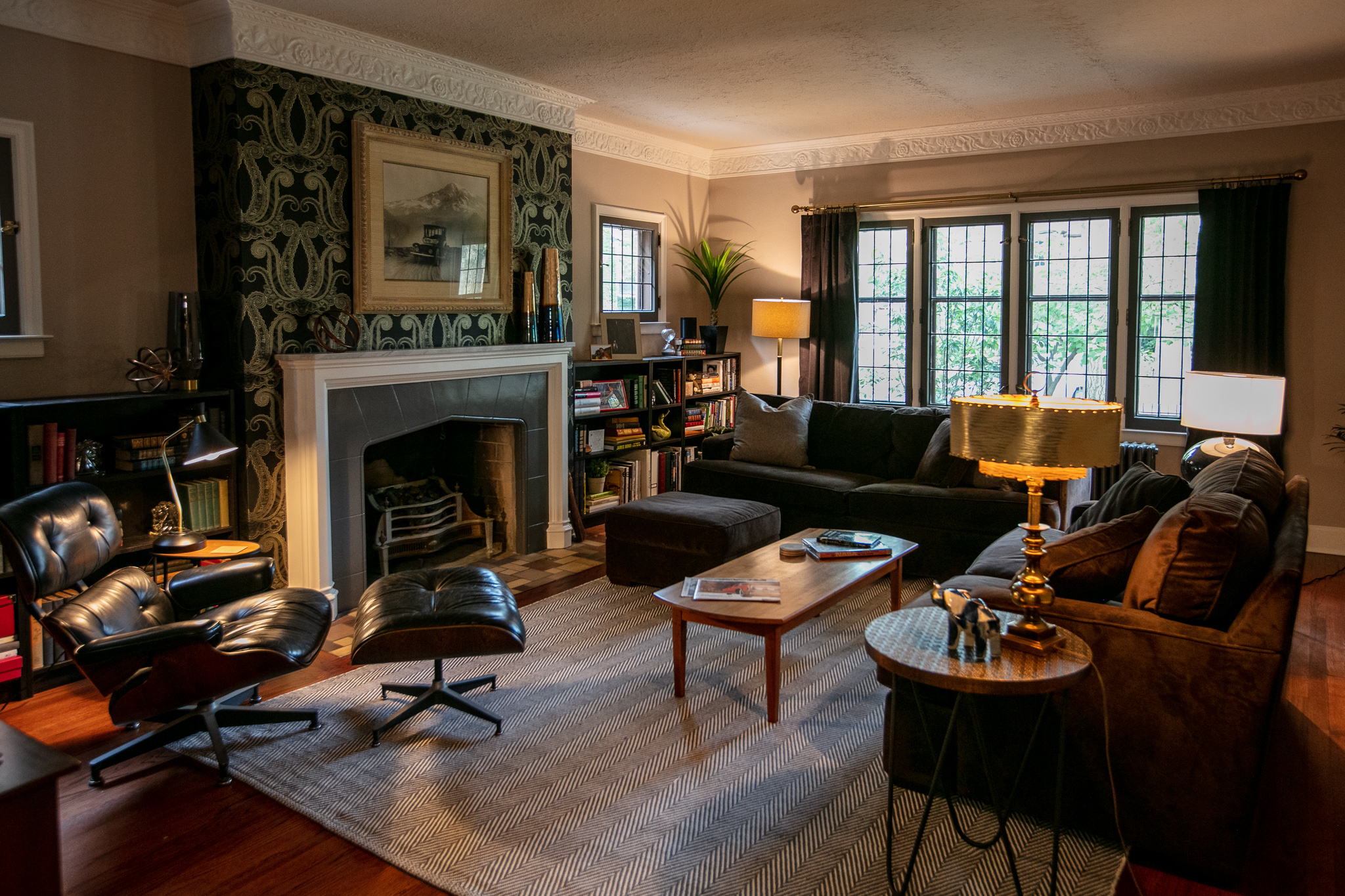 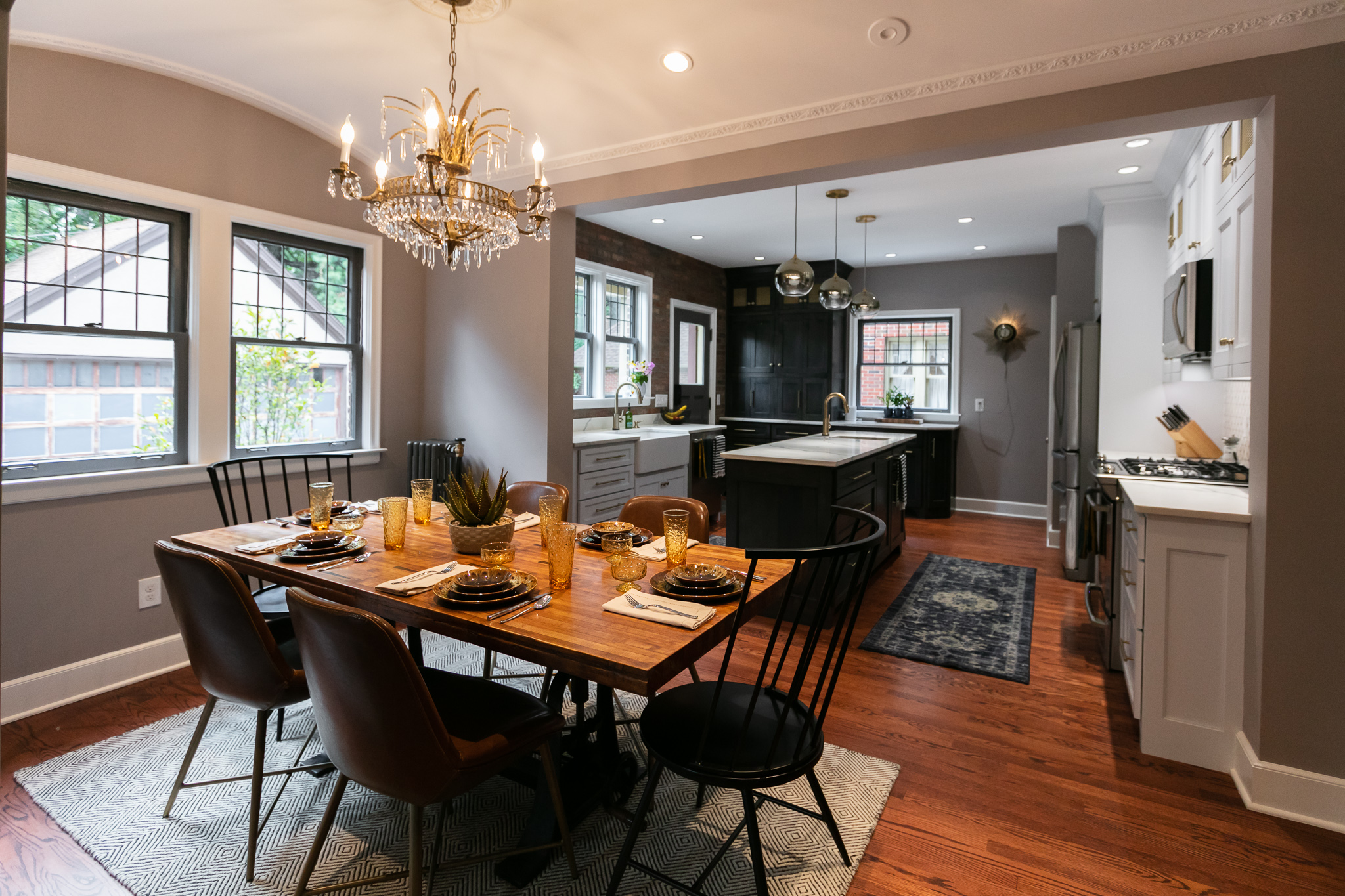 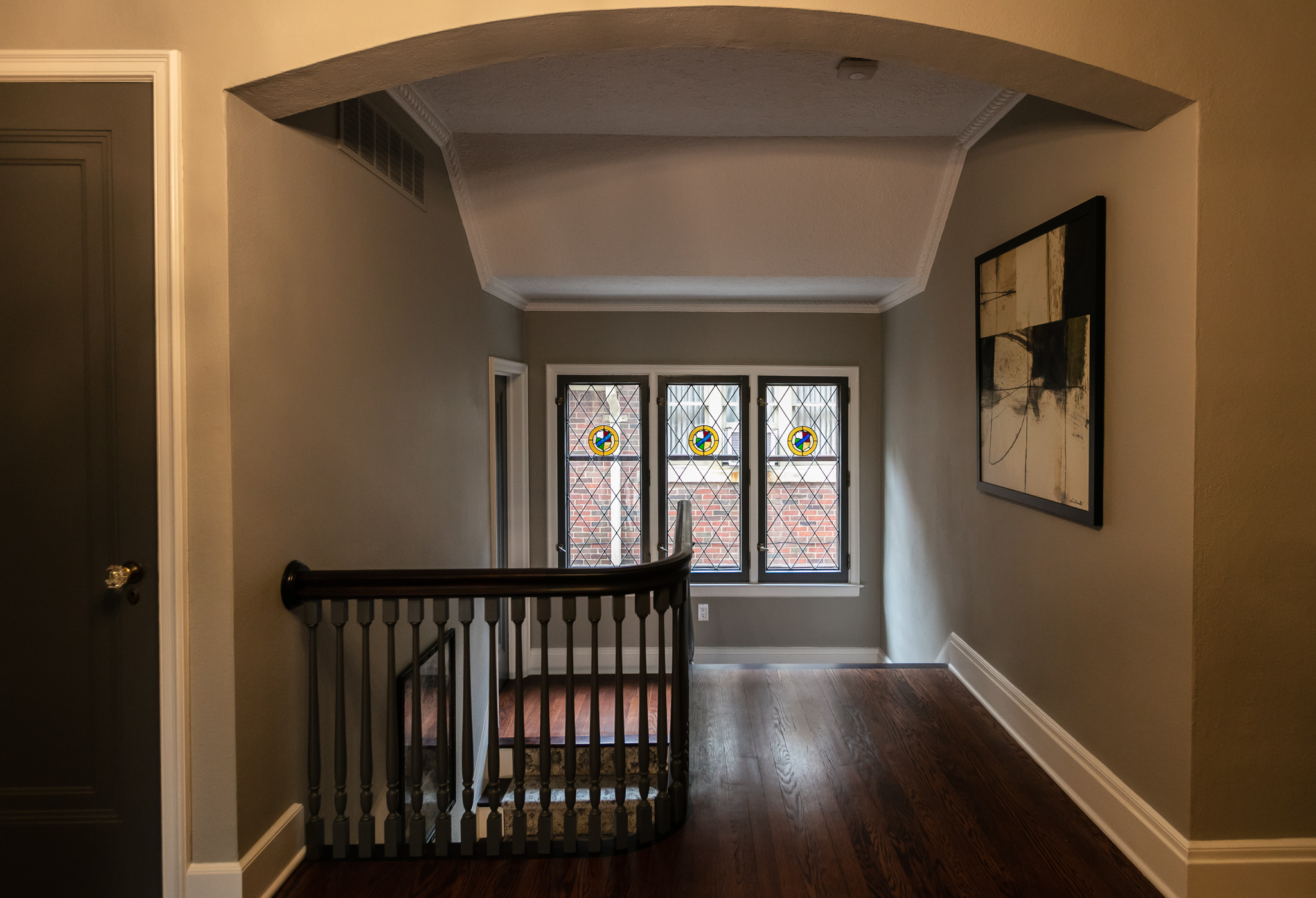 Downstairs, challenges included getting the grime off of the windows after seven years of vacancy and construction, building the archway into what’s now the dining room, and building an entirely new kitchen. They also wanted to tear down the encased porch—what they now call the Wendy’s smoking section—but have grown to love it.

The downstairs living spaces are full of beautiful details. A trunk in the living room was pulled from the attic. It dates back to 1909 and is known as a physician’s wardrobe—the original owner was a prominent OBGYN. A painting found on a trip to Shanghai looks over the piano room. Historic Detroit photos line the stairwell. The dining room table was made with a bowling lane from Cloverlanes. The kitchen cabinets are Amish and custom-made—Steinhauser says the cost wasn’t much more than they would have paid at a big box hardware store.

Upstairs lies one of the biggest challenges in the renovation—the master bathroom. A bedroom and bath were converted into a large bathroom/walk-in closet. The couple knew what they wanted—laundry, a shower, a stand-alone tub, a double vanity—and reworking water and low windows made configuring the layout like a jigsaw puzzle. They say the way they did it is the only way it could have been done, and the result is a knockout.

Three bedrooms sit on the second floor, including the master bedroom. Another is decorated in a 60’s theme—the paint-by-numbers painting was done by Suman’s great-grandfather. Another guest room had to be completely gutted because of water damage from a bathroom above it. A family member who grew up in the house and visited said that they didn’t change anything in the room; in fact, they changed everything, but stuck to the original character. Pink tile remains in the hallway bathroom, with a shower added to the tub.

Steinhauser and Suman still have a few details to finish up, including panels on the garage and landscaping. Contractor Cal Garfield says its rewarding to see a project like this finish; he works with many people who don’t get this far renovating the house they plan to live in. As a builder, he says, he gets emotionally invested in these projects.

The couple feels like being able to entertain in their new/old home has been very rewarding, as is opening it up for the tour and giving back to the neighborhood they now love. In the process, they’ve found members of families who have spent time in the house—decades ago and now visiting again—and that has been very meaningful.

Our photographers captured more details around the home, as well as some photos during the process—we’ve included a few for sliding comparisons. The University District Home Tour is scheduled for September 9. 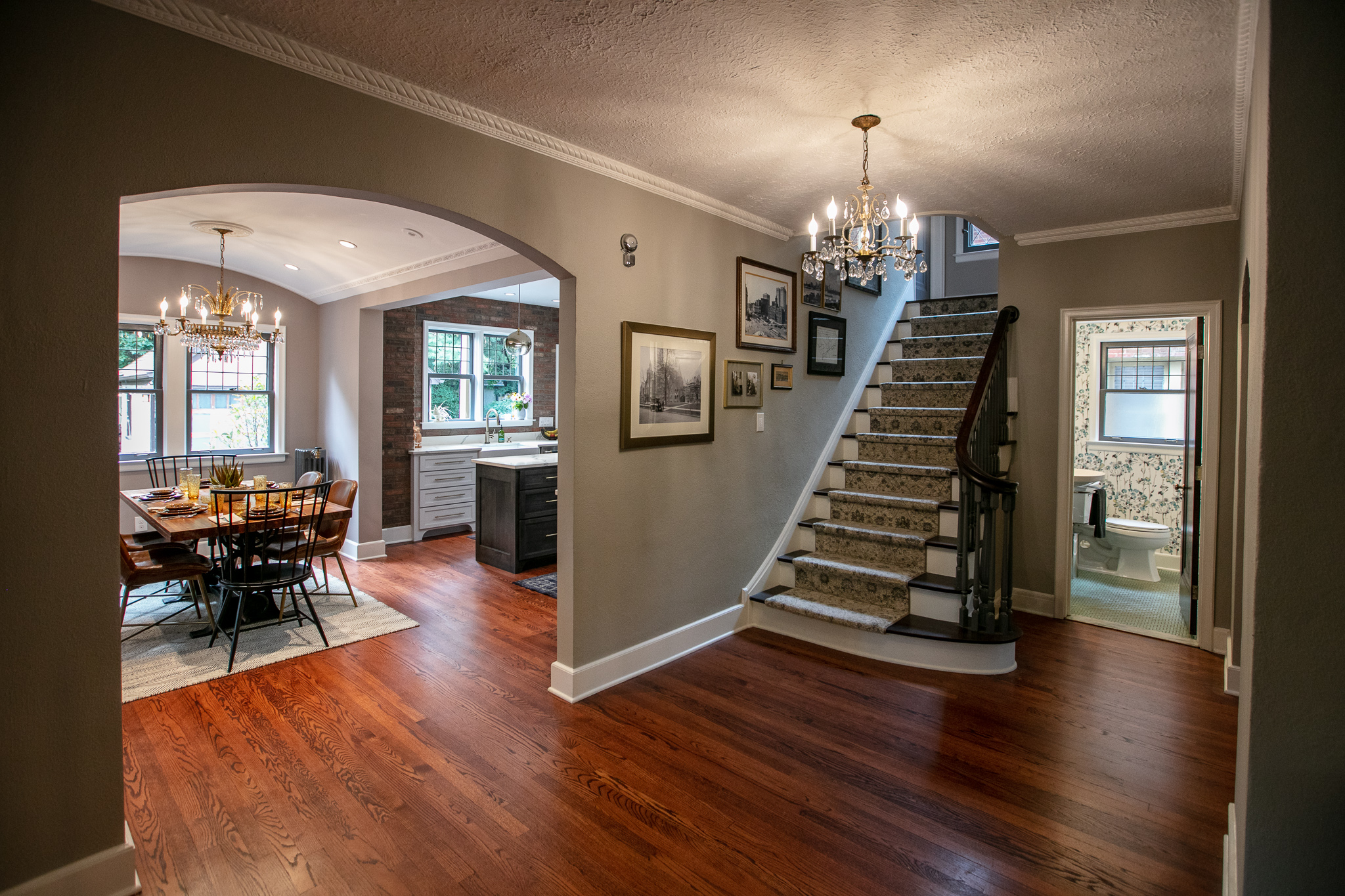 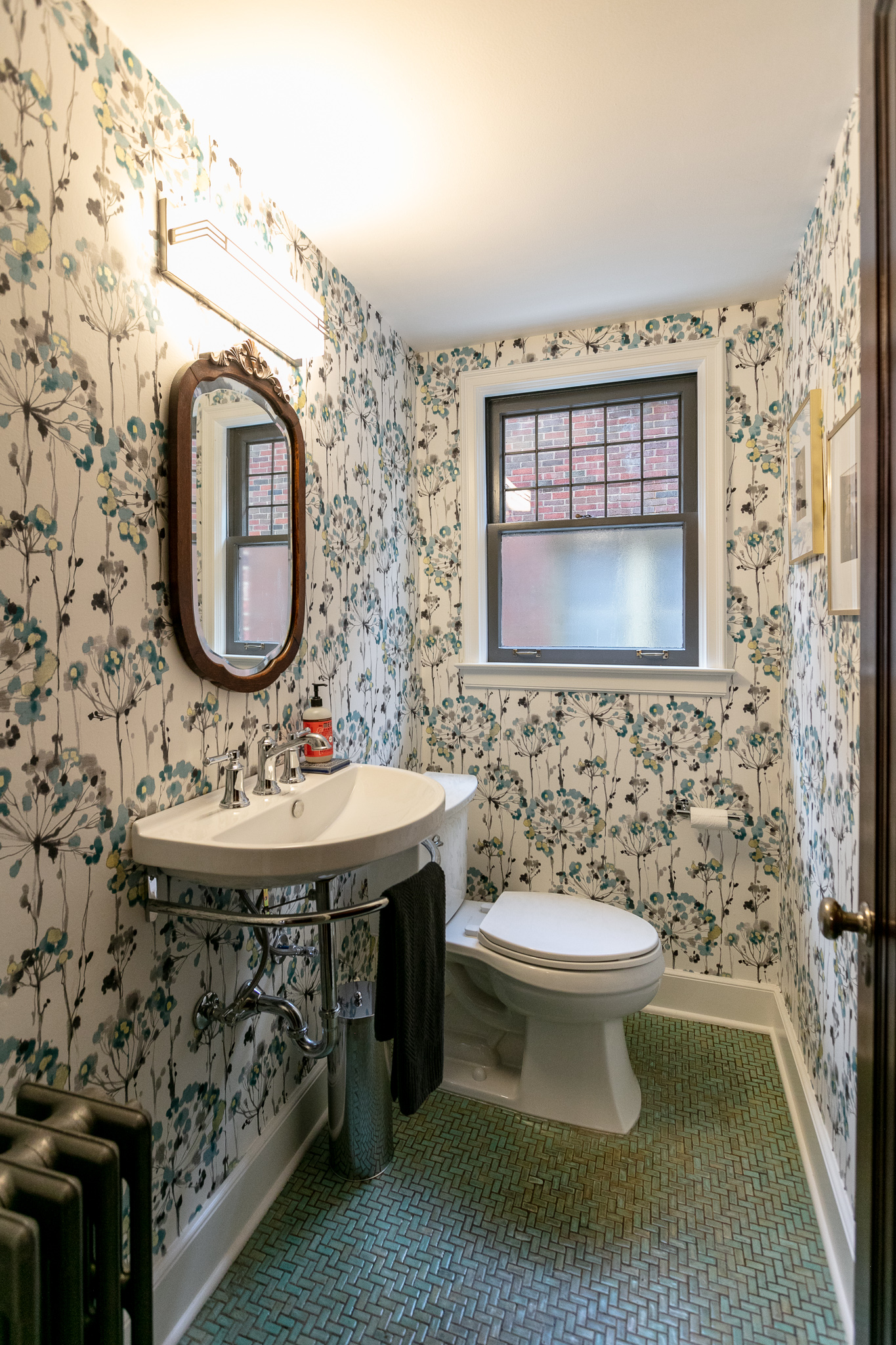 View all stories in Detroit Renovations